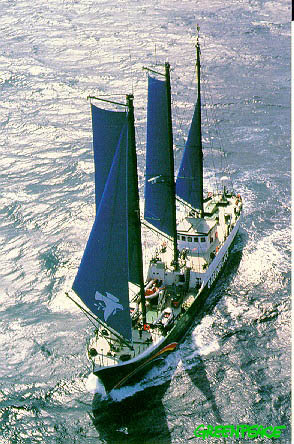 It’s 4am in the morning, 1st of September 1995, and I’m on board a converted fishing trawler, the S/V Rainbow Warrior acquired by Greenpeace after the original Rainbow Warrior was sunk in Auckland harbour, 10 years ago. I hadn’t slept in 24 hours, and I knew the coming day wasn’t going to be a short one either. I had only just completed all my preparations for the coming day, hung the gas mask off the port hole ready for use. The door had been pre-welded, so that a bar could be placed across it, and thus secure it, stopping anybody from entering the radio room.

I reflected on the situation for a minute, that’s all I had. One wasn’t really given the time to actually con

sider what might happen in the next hours, let alone the next days. From the shouts from above I heard that all the inflatables had successfully been launched, and we were well on our way to crossing the 12 mile exclusion zone, that had been made a forbidden area around the Moruroa atoll, where the French planned to explode up to eight nuclear devices.

The ‘SkylinkVIDEO’, known in inner circles as the ‘Squisher’, utilises the Inmarsat-A High Speed Data service that connects to the ISDN networks. It transmits the Video footage at a rate of 64Kbit/s, the speed of a single ISDN connection. To pass quality broadcast video over this line, MPEG-1 compression has to be used. This compressed data is sent to a receiving terminal that is located in London, at the Greenpeace Communications headquarters. Here the video is reformatted onto analogue BetacamSP tapes, and then sent via couriers to the various television networks.

The whole ‘SkylinkVIDEO’ unit is a modified Pentium based PC installed into a 19″ rack format. It contains Optibase’s MPEG-1 LabSuite hardware and software, and a modem for the High Speed Data connection. The front panel contains a colour LCD visual display unit, used to preview footage that has been digitised, and also for the standard computer operation. There are also sound level indicators, apart from the standard 3.5″ Disk Drive and a 2GB SCSI hard drive. The MPEG controller card is connected to a BetacamSP player, from which the footage is digitised. The footage then can be edited on the computer, so that only the necessary shots are included in the shot list to be transmitted.

Due to the fact that a 64Kbit/s channel does not allow quality live footage to be transmitted, the data is transferred over the satellite in a store and forward method. The footage is sampled at approximately 1500 Kbit/s and then compressed at an approximate 1:20 ratio. This means that in end effect for a one minute shot, a transfer rate of 20 minutes is needed.

Inmarsat is a service comprising out of a group of signatories, principally from Telecommunications organisations around the world. It allows for communications from 85% of the world’s surface, excluded are the extremities of the poles. Inmarsat-A is the first service that was provided, which works using an analogue system. This has now been succeeded by Inmarsat-B, which is the digital equivalent. This system allows for access to the world-wide telecommunications networks via telephone, fax, telex as well as High Speed Data (64Kbit/s). In simple terms, it basically is a telephone connected to a dish which in turn connects you to the terrestrial network via an Inmarsat Service provider.

Well, back to my situation, where I was locked up in the bowels of a ship, which within hours was most certainly going to be boarded by French commandos. I had set up a remote camera in the wheelhouse, which gave me a view of what was happening there. Also we had installed a microwave link so that the cameraman on deck had his signal transmitted to a dish at the top of the mast. This signal then came down to the radio room, and again I had another perspective of what was happening on deck. Of course this material was being taped, ready for digitising and transmission to the media. It was also possible, to retransmit the footage via microwave to the Greenpeace helicopter that was in the air above us. The helicopter could then transfer the material back to the MV Greenpeace, not far away, which also had a ‘SkylinkVIDEO’ installed.

A little after dawn the call came from above, that we were being boarded. Over the radio the French navy told us that we had passed into the exclusion zone, and that this was against their rules and regulations. The campaigner who was in the radio room with me was on the second Inmarsat phone to media in various areas of the world, giving an account of what was happening. I saw over the cameraman’s camera how the commandos came over the deck railing and how they started to disable the ship. They also quite quickly disabled the cameraman, which I saw as the camera came crashing down onto the deck.

Slowly the communications’ equipment in the radio room died, as the commandos cut through all the antenna wires on deck. Although the Inmarsat unit that I was operating, was the last to be affected, it sounded the most horrible as it came to a spluttering death. This was emphasised by the sledgehammer banging that was happening directly above the radio room, where the commandos where smashing the pipes that contained the cabling for the Inmarsat unit.

We spent approximately another 20-30 minutes in the radio room before the commandos had cut their way through the door with a gas axe. These minutes were probably the most anxious, not only because of what was happening around us, but because brute force used by military still does not allow for freedom of speech.