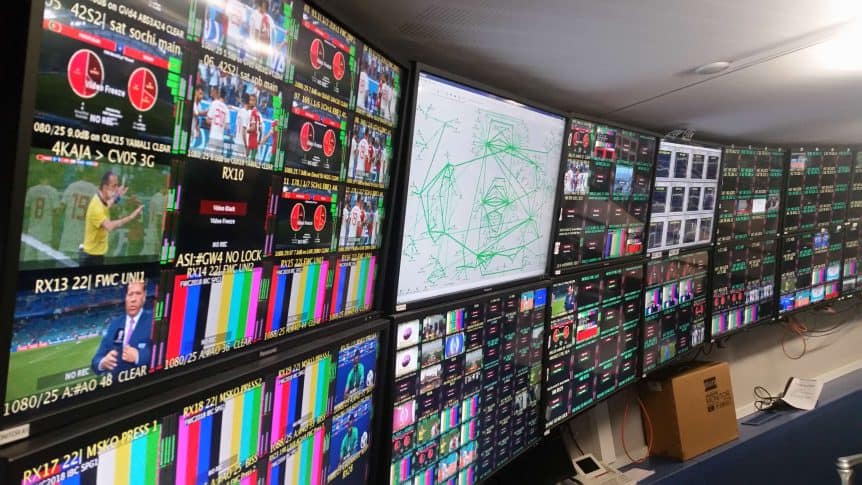 Ever wondered what happens even before the Broadcaster gets a hold of the TV signal to put on your Television? What happens between the camera and your television?

Every four years the FIFA World Cup showcases the skill and talent of the world’s best players, but it is more than just a football tournament: It is the aspiration of FIFA TV to deliver a world class TV production, and every country in the world shows it one way or another. Some more prominent and free to air, whilst others behind a shroud of Pay TV or online links. But all share the same original signal.

On site at every stadium there is a production team that creates a coverage of every match with up to 34 cameras. No broadcaster is allowed to shoot their own match coverage. But every broadcaster (who has paid for the right to do so) may supplement that produced signal with their own studio, or reporting from their onsite team.

The produced signal is carried back to a central hub, which in this case is in Moscow. Here in the IBC (International Broadcast Centre) the various signals are processed to then be distributed globally via either satellite or fibre. In total for this World Cup there’ll be 5 satellites used, and there is a set of fibres running out of the IBC that totals some 7,500 Mbps of data connectivity.

There are around 30 simultaneous signals, both multilaterals signal (i.e. the signal that goes to all broadcasters) and unilaterals (i.e. signals that are custom contracted by single broadcasters). The signals are either in HD format at 42Mbps (yes, that dwindles down to about 4mbps or less by the time it hits your screen), and 100Mbps for the 4K signal.

The global network is monitored from the IBC in Moscow, with further monitoring in Geneva and Leuk (both in Switzerland). All signals are encrypted on 2 levels, one on a per “signal” basis where the receiver (broadcaster) needs to know a code, and once on a “carrier” basis which is controlled by the network controller.

Once it gets to the TV station, cable TV or online broadcaster the signal is then reformatted to fit into their programming. They may further add to it with commentary or items they produce in their own studios. And of course, commercialise it, by putting in advertisements slots, pay platforms etc. so that they can get their money back. But note that even the advertisement is very tightly controlled, as FIFA, the event owner wants to ensure that their sponsors are not competed with!

Article written by Tim Gorter, teletechnics.com. Tim focuses in Audio/Video installation support and the integration and control with/by the user devices. He often also works on international events in ensuring the delivery of the perfect TV signal.